We’ve been getting some questions from Discord about Last Regiment and game development in general, so we’ll take the time to answer those today.

A Quick Overview on Game Licensing
Are we interested in having people write about our games and publish novels related to our content?

This is not the first time we got asked if books can be made within the license material of our game, or if we could hire someone to write a story for us.  We wanted to quickly walk through the business of that. There are basically two frameworks by which that happens.

Having said that, the Last Regiment license is not yet worth enough to charge a license fee for, and we don’t have the resources to do it ourselves or pay anyone else to write for us. So unfortunately, no Last Regiment books to look forward to in the near future. Speaking of stories…

Creating the Story and Lore
What is Last Regiment all about?

We’ve always said that we were going to take the lore building and story seriously. It’s an easy thing to say, but before we delve further on that, we’d like to share another fun fact.

Not many people know that 99% of game designers are frustrated authors, and sometimes it shows in the games they make. One of the real challenges in writing a video game is to take that author part of you, the one who wants to tell a story, and shove him down. You need to stop yourself from writing that story, because in games, the players want to make their own stories.

In books, the characters do precisely what the author tells them to do, think, and say. You can’t do that in games. There’s this other person who wants to do their own thing and make their decisions meaningful. The game writer must fight the urge to say “You’re not supposed to do that! You’re supposed to go here and do this!” For example, players would have a choice if they want to go here or there, so a designer has to make both of these places interesting.

This brings us to writing the lore of Last Regiment. Before you can write a specific story, you must first create the world where it takes place in. Months ago we started putting together a skeleton outline on the basic ideas about the universe, and gradually adding notes on how the world is, who the characters are, and what the history is. Since we were looking at it from a wider angle, there was some confusion on what would actually be happening in the game.

What is going on? Why do we have these characters?

As we build the art for the game, we started getting questions on why we have a variety of characters with very diverse themes. For some it didn’t make sense, and that was problematic. Then we continued to flesh out the ancient history of the world to show how all the factions and units came to be, and conveyed this to the team.

The next story dump included more details on the period called The Reconquest, when people from the old world started to go back to a continent that they had tried to colonize in the past. This is where the story takes place, after several years of apocalyptic wars between the races where they used both magic and machinery. This was inspired by the modern age of the Enlightenment Era, and we looked at the colonial histories in Europe instead of the usual medieval setting of fantasy games.

This is where we are a bit torn. We want to keep people involved, but we also don’t want to spoil the game. We want players to have a sense of discovery and exploration when they play it. At the same time, we’d still like to have the freedom to change it.

Where are our characters in this lore we are writing?

If you look at the heroes and units in the game, none of them appear in the history. When you’re putting together a world, the first step is the large history of that world. The second step is detailing the facets of that world such as the technology, magic, transportation, weaponry, money, language, races, and a bunch more data that needs to be compiled. After these two are done, the final step is the actual story of the characters in the game: where are they going, what do they need,  how do they meet, etc.

Doing the first two steps is important before you start anything because you need something that could lend something before you get to the end. But even when you reach the final step, you should be aware that sometimes the world and some of its faces might change because of the new things you are adding to the game.

What is the scale of your story?

Again, we take a look at Legends of Callasia, which has an epic scope. You’re a general taking over chunks of kingdoms and saving the world. Last Regiment does not have an epic scope. By design, we want to keep everything much smaller. Yes, there is a huge thing happening, which is the Reconquest, but you are only a part of it. Your choices are probably not going to change the entire world history of the game, but it’s about the characters going through a journey within this environment. They are not captains or lieutenants. As the title implies, you are controlling a regiment, not a huge army. It’s a much personal story and we want our players to care about these characters.

Back to the game, we had a big conversation about the dialog system and scripting the single player missions. The work is underway, but it’s not going to be done in a few weeks. Developing scripting engines is an iterative process that would take several months.

Right now we are trying out a variety of mission types and determining different variations of environments, failure goals, and other things that can be considered fun.

We’ve also made some changes to the user interface! Now you can preview the units in each regiment without going to the Choose Your Regiment screen. 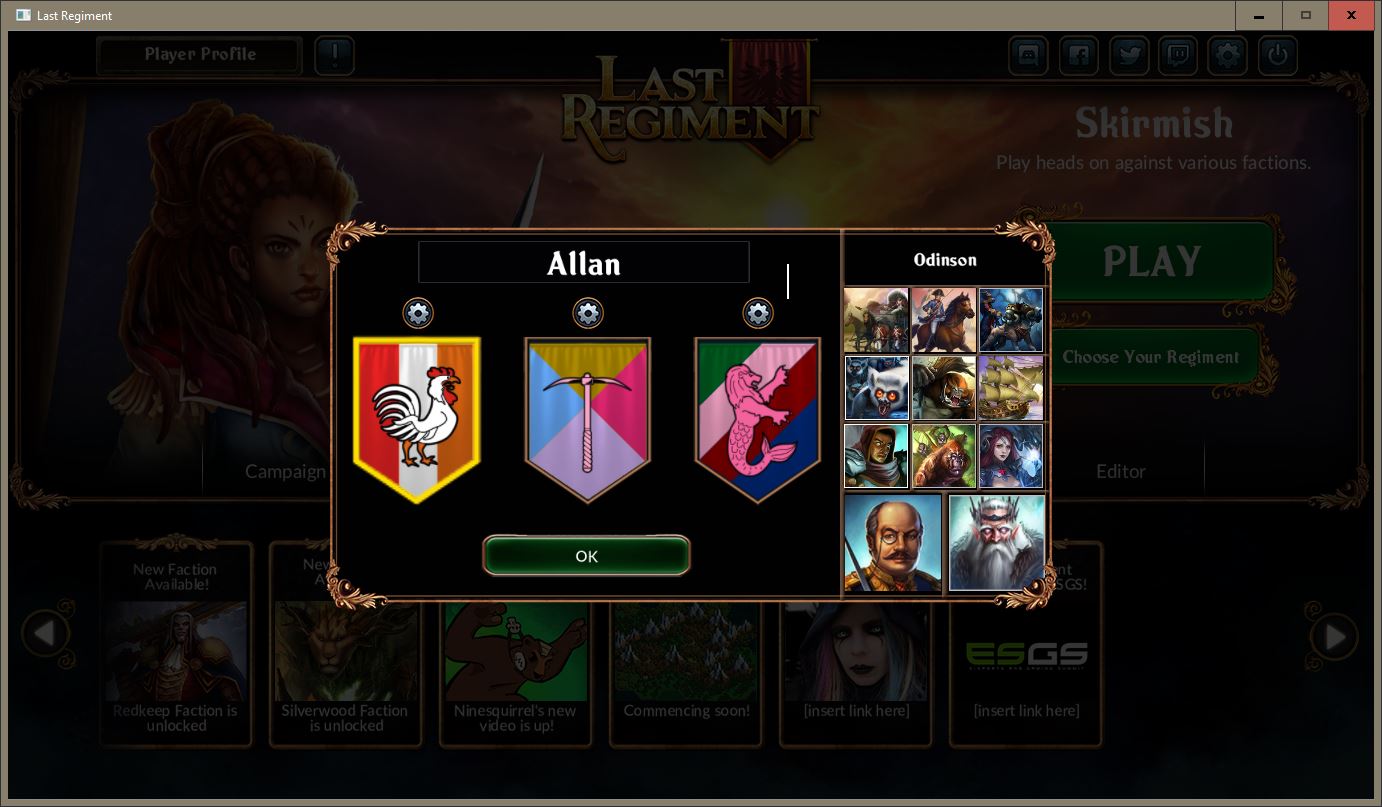 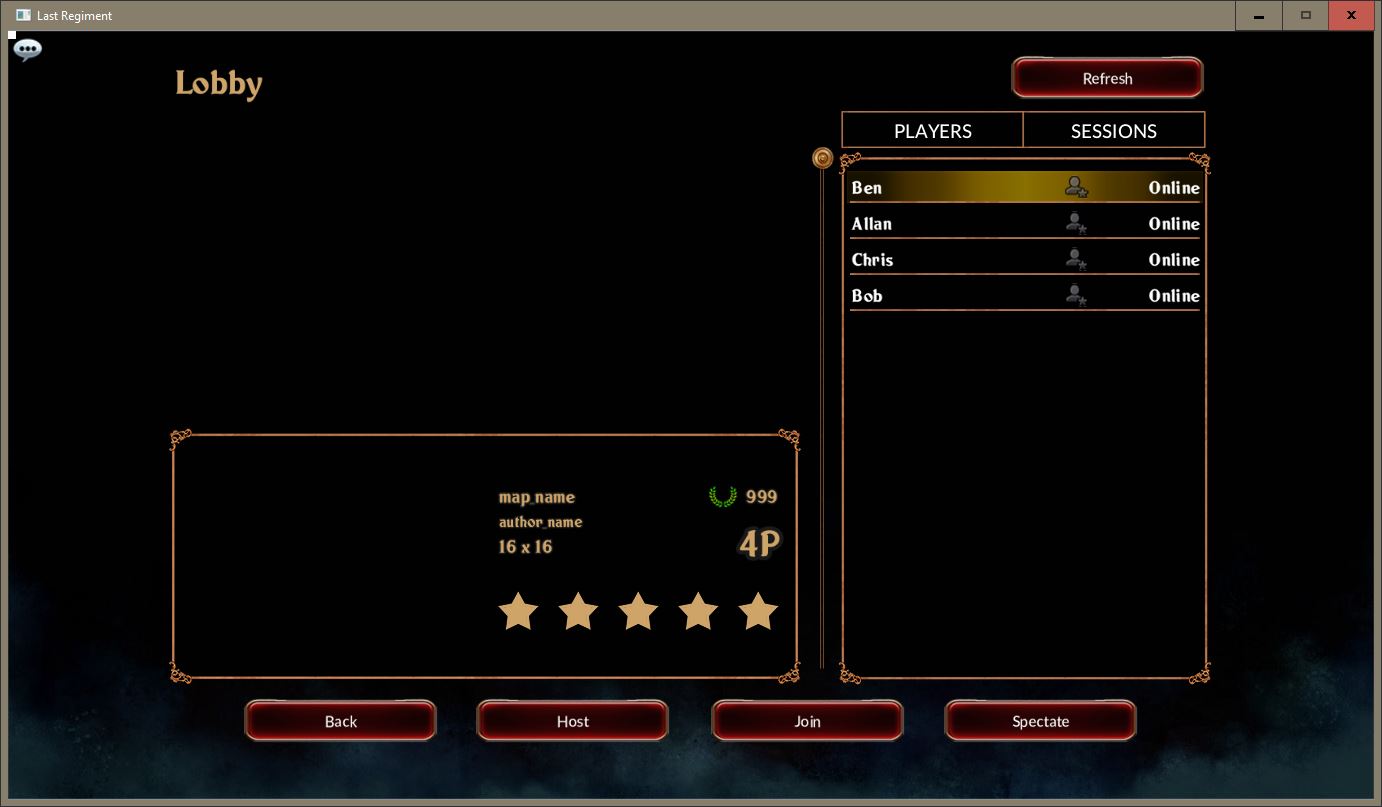 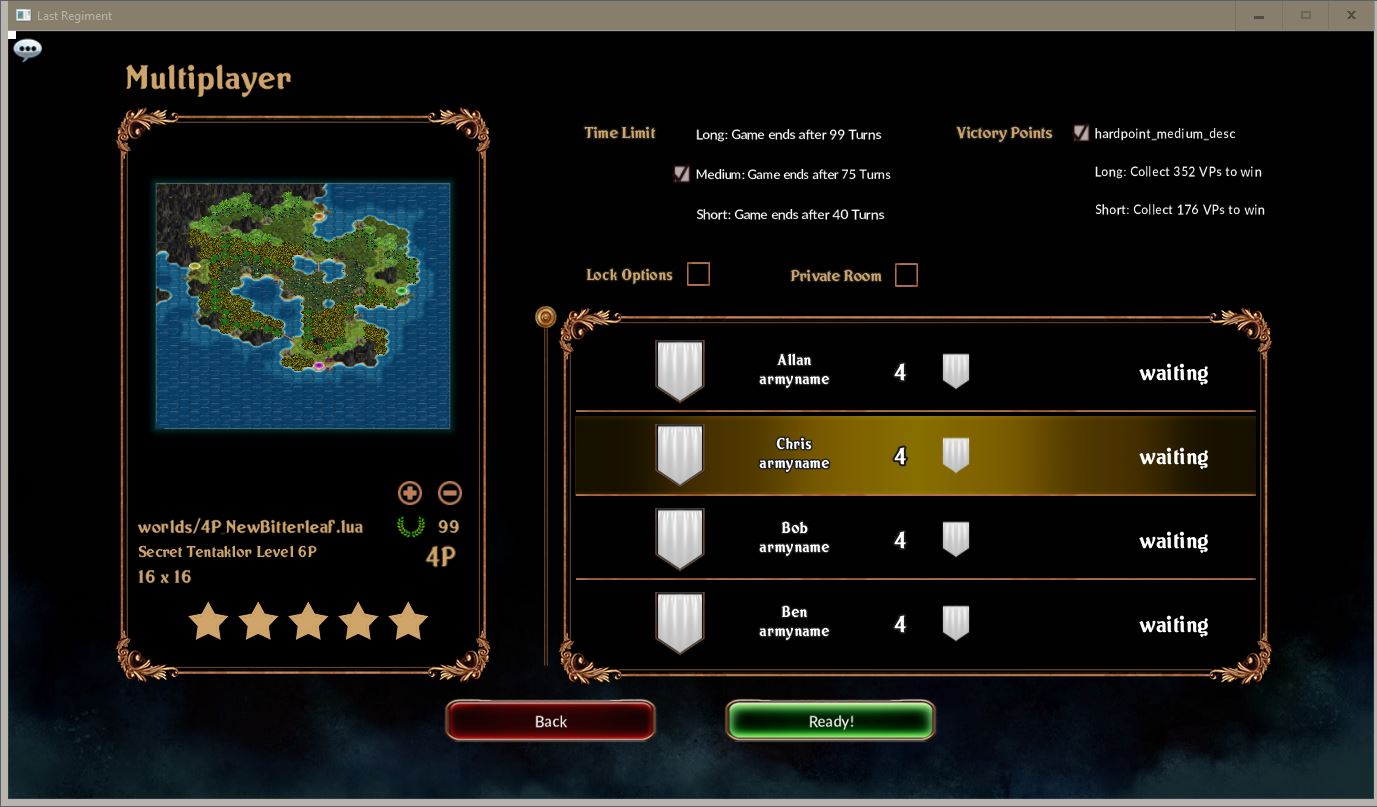 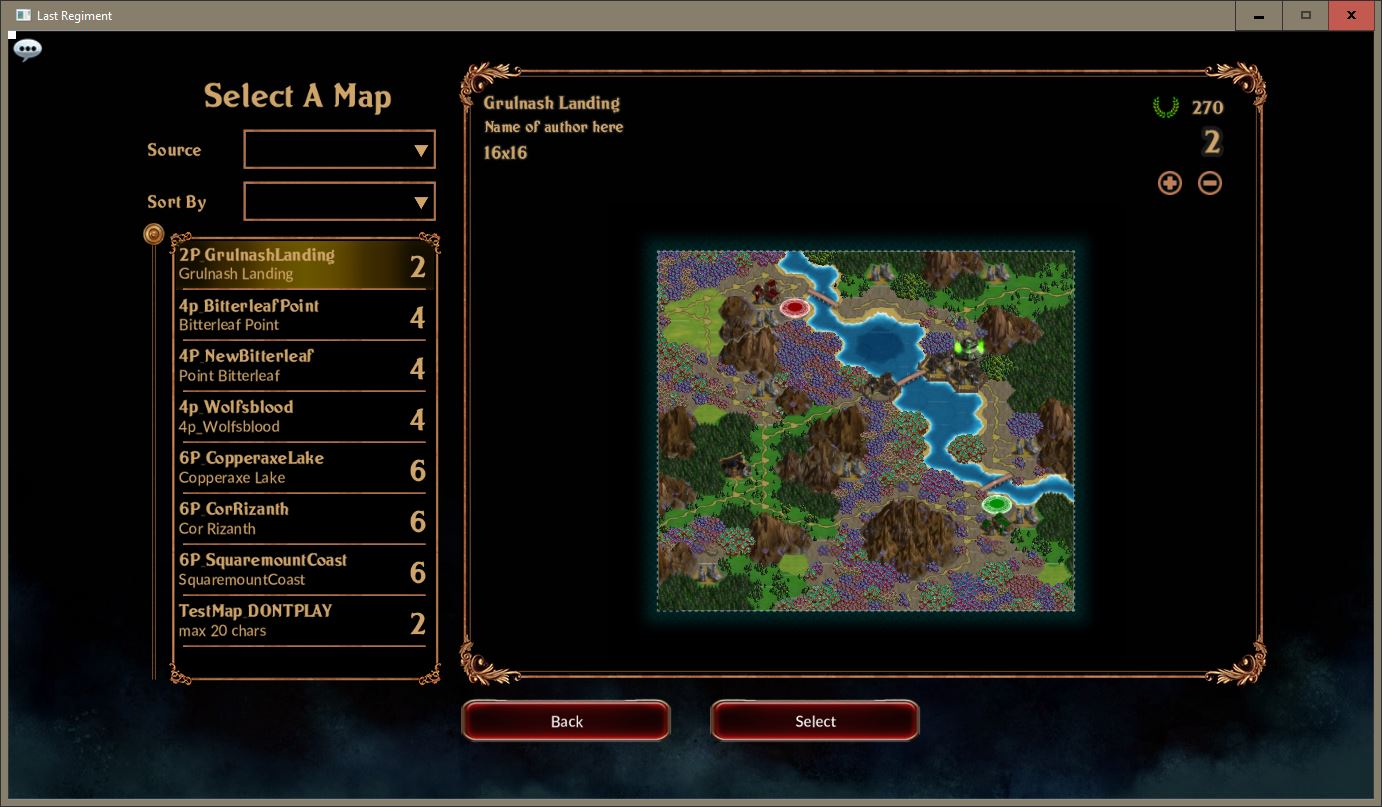 There’s another screen we’re currently updating, but we have to stop and think about it mathematically.

The Cost of Adding New Features
Can we please change X to this? Why can’t you do this?

Every time we consider adding a new feature to the game, it has to be a cash-positive decision. Let’s take for instance the Choose Your Regiment screen. 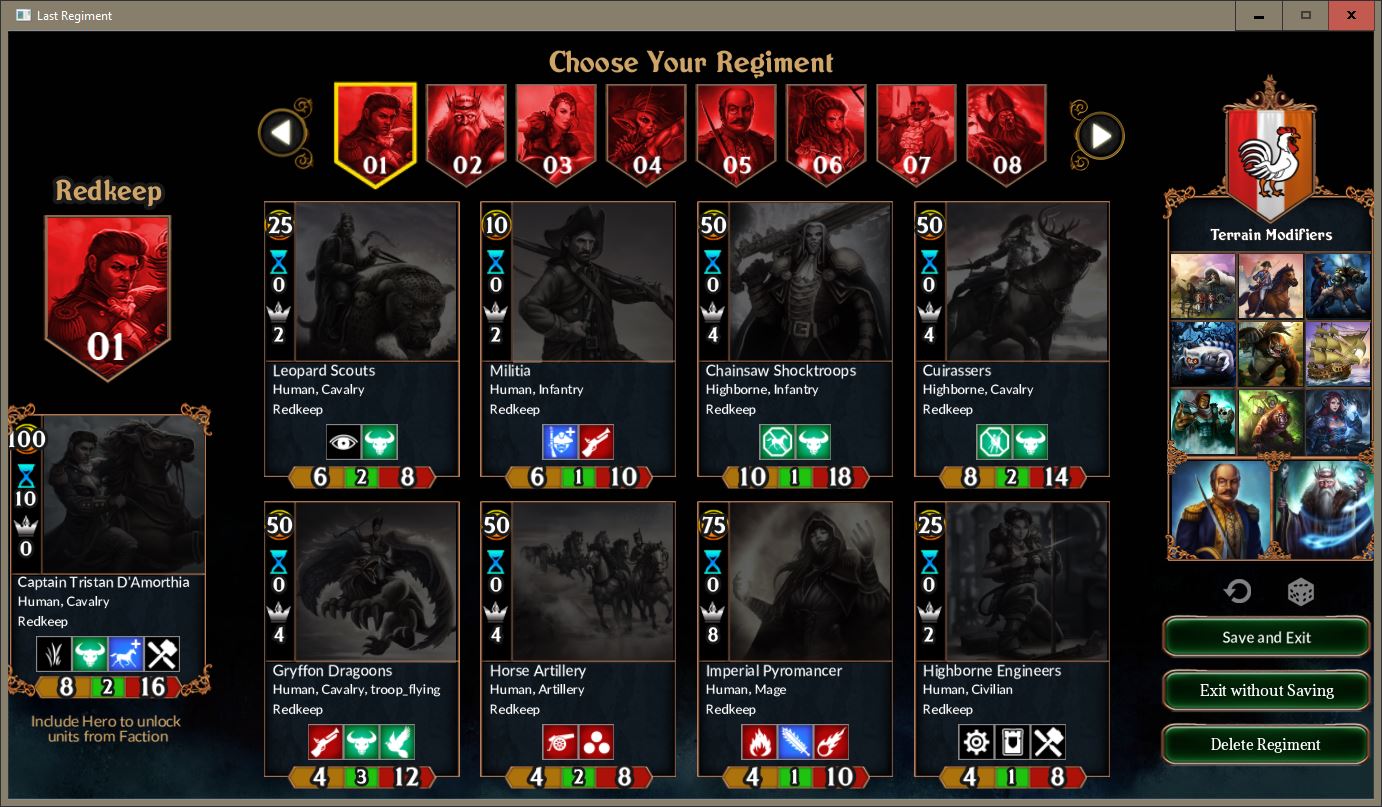 A couple of weeks ago, we had the idea of having different background art per faction. Each background would take an artist  at least 3 days to make. With 14 backgrounds in total, it would take 42 working days. Since the team gets paid a monthly salary, we need to look at the cost of making it and how many more copies we need to sell – and it’s a bigger number than what most people would expect.

If we look at new game features, you would have to consider the time it takes the coder to implement it, and for QA to test it. Everyone of those ideas needs to put into this math, and this is why sometimes the seemingly simple things don’t make it into the game.  For the moment, we’re happy with keeping the Choose Your Regiment screen as it is with a black background and customized emblems per faction.

This doesn’t mean we don’t welcome any new suggestions. Keep your comments and questions coming, and we’ll see you in the next dev update.